According to the annual Large Crush and Bus Facts report released by the Federal Motor Carrier Safety Administration, there were approximately 475,000 police-reported crashes involving large trucks in 2016. Of these big truck accidents, 3,864 were fatal and 104,000 resulted in injuries. This number of crashes represented a 29-percent increase in truck and bus accidents compared to the number in 2009.

Commercial truck accidents often result in serious injuries and death because of the massive size and power of these vehicles. The 7 most common reasons for big truck crashes are described below, along with some tips about what to do if you are involved in a truck accident.

The Federal Motor Carrier Safety Administration prepared a multi-year causation study that examined the cause of commercial truck accidents, called the “Large Truck Crash Causation Study.” According to this report, brake problems were the number one contributing factor to these trucking accidents.

Another 23% percent of accidents involved traveling too fast for conditions as a contributing factor, according to the study. Commercial trucking operations are often paid by the load, creating an incentive to transport goods as quickly as possible. However, given the strength of these vehicles and the longer time needed to avoid an accident after braking, speeding can put other motorists’ lives in danger.

According to the study, driver fatigue is a contributing factor in 13% of truck accidents. Truck drivers must often travel long distances for many hours, leading to drivers getting tired while performing their job duties. Due to this common problem, the Federal Motor Carrier Safety Administration has implemented hours of service rules that regulate mandatory breaks and limits on how many consecutive hours truck drivers can drive. Property-carrying drivers are limited to 11 hours of consecutive driving after being off duty for 10 hours. Truck drivers also can drive after 60 or 70 hours of being on duty for 7 or 8 consecutive days. An experienced truck accident lawyer can request documents from the trucking company to determine if fatigue may have contributed to an accident.

Commercial trucking companies are required to follow Federal Motor Carrier Safety Administration policies on drug and alcohol testing. These rules require trucking companies to test drivers for drugs or alcohol before hiring them and after an accident. They also mandate policies on how to return a truck driver to service after he or she has violated a Department of Transportation alcohol regulation.

Between inattention and external distractions, 27% of truck accidents were affected by distracted driving. Commercial truck drivers must often travel long distances and may get bored, turning to cell phones, music, GPS systems, and other distractions to keep them entertained. However, these distractions can make the truck driver lose focus on the important task in front of him or her. Distracted driving by commercial truckers is associated with one of the riskiest behaviors, according to the study.

Commercial truck drivers may take advantage of their bigger size and force their way through traffic. They may turn in front of other vehicles, follow too closely, fail to keep a proper lookout, or make an illegal driving maneuver that may result in a big truck accident. 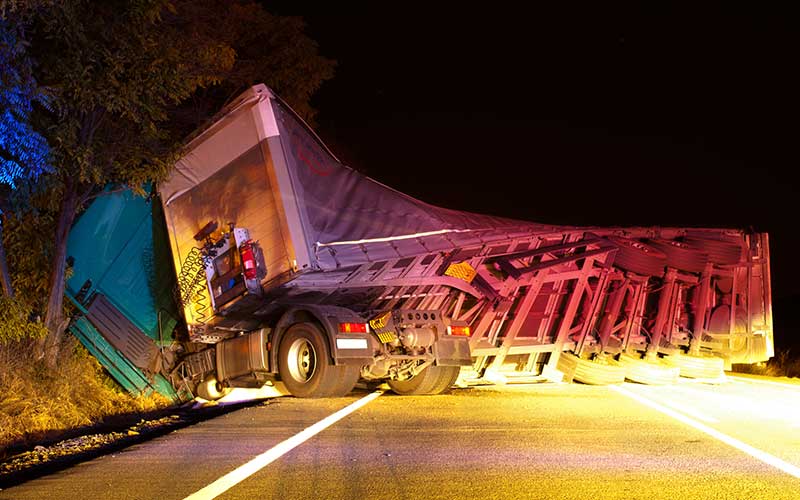 What To Do After A Truck Accident

If you are involved in a truck accident, follow these quick tips to protect yourself and your potential claim:

If you are involved in any type of motor vehicle accident, it is important that you stop and report the crash. This is especially important to do if you are involved in a large truck accident because multiple parties may be involved in the trucking operation and a report can provide written documentation. Additionally, a law enforcement officer can prepare a report that details when the accident occurred and if he or she has identified potential causes for the collision. Request a copy of the report afterward and keep it for your records.

If you are able to, try to get the following information from the truck driver:

If you are able, try to document the scene. It will probably be cleaned up quickly, which can erase valuable information. Take pictures of the accident scene, the damage to your vehicle and the truck, and any debris on the roadway. Try to get pictures from different angles. Also, photograph any nearby signs that may have been ignored.

Other people may have witnessed the crash. If you see anyone else nearby, try to get their contact information. Also, note whether any area businesses or traffic cameras are nearby that may have captured surveillance of the accident.

Many big truck accidents result in serious injuries. Even if you do not believe you were injured, it is important to get checked out in case you have injuries you are not aware of, such as internal damage. Also, sometimes the adrenaline that being involved in an accident can mask your symptoms. Take pictures of your injuries immediately after the accident and as they progress. This can later be valuable evidence in your case.

It is usually best to contact a personal injury attorney as early in the process as possible. He or she can take immediate steps to preserve valuable evidence. They can also handle communications with the insurance company, which can protect you from saying anything that may damage your claim.

If you have been injured in an accident involving a big truck, call "THE BIG TRUCK LAWYERS" at The Graham Firm. We'll aggressively fight to help you get the settlement that you deserve. Get a free consultation today by calling us at 404-526-9955 or contact us online.